My Best Games in the Caro Kann Defence 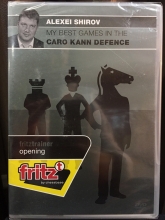 The Caro-Kann Defence, which arises after the moves 1.e4 c6 followed by d7-d5, is considered to be one of the most reliable defences to White’s 1.e4. Black fights for his share of the centre and patiently awaits his chance. Shirov’s preferred weapon against this solid setup by Black has always been the Advance Variation 3.e5 - with chances and risks for both sides. The main focus of the DVD is on plans for both White and Black after 1.e4 c6 2.d4 d5 3.e5 Bf5; the Latvian super-grandmaster explains these with the help of the best games culled from his own praxis, as well as three theoretically important games played by others. The material which has been added for this new edition concentrates on the variations after 4.Nf3 e6 5.Be2.

Alexej Shirov was born in Riga just like world champion Mihail Tal, and also his playing style reminds many chess fans of the young Tal. In the beginning of the 90's, a comet-like rise brought the young Latvian to the world top within the shortest of time. Being no older than 22 years, he already had an Elo rating of nearly 2750 and belonged to the absolute elite. Since then Shirov has been one of the best players in the world, delighting all chess fans with original and amazing ideas on the board