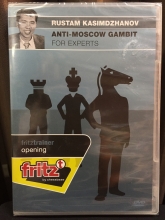 After the moves 1.d4 d5 2.c4 c6 3.Nf3 Nf6 4.Nc3 e6 5.Bg5 h6 6.Bh4 dxc4 7.e4 g5 8.Bg3 b5 (D43) the Anti-Moscow Gambit arises on the board which currently is one of the most hotly contested openings in grandmaster practice. Ex-FIDE World Champion Rustam Kasimdzhanov gives an introduction into the youngest development of this variation, starting with the game Radjabov - Anand played in August 2006.